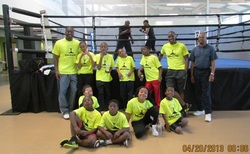 Our boxing experience was a knockout.  We went to The Charlotte Sports Academy.  The facility was impressive.  We worked out with Boxing Coach Tony Douglas.  Mr. Douglas is a former Golden Gloves Champion, Olympian and Professional boxer.

Mr. Douglas told the story of his life, and he spoke on Determination.

After Mr. Douglas spoke, he then UNLEASHED the kids into some intense workouts. 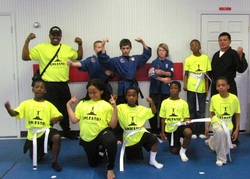 We went to Martial Arts Training Institute, (MATI) in Harrisburg NC.  We met with the chief instructor Hardley Soryes. (Seventh Degree Black Belt)While at MATI, the kids observed 3 young Black belts demonstrating different Martial Arts techniques.  At the completion of the demonstration, Mr. Soryes told the story of his life, and he spoke on Discipline.

After his speech, Mr. Soryes then UNLEASHED the kids into agility and listening drills.  At the end of the session each kid was awarded a white belt and a free 30 day Trail-membership to MATI. 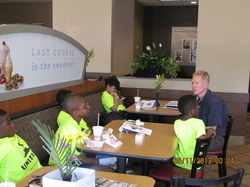 We went to Chick Fil A, in the University area, Charlotte NC.  We met Rob Rogers. (Owner of Chick Fil A) Mr. Rogers told the story of his life, and he spoke on Perseverance.

After he spoke, Mr. Rogers showed the kids the workings of Chick Fil A.  He introduced the kids to team members, and stressed the importance of each and every team member.

We went to Charlotte Fencing Academy, in Charlotte NC.  We met with Fencing Instructor Ms. Colleen Gallant.  Ms. Gallant taught us the basics of Fencing.   After the class, Ms. Gallant suited the kids up and UNLEASHED them into fencing exhibitions.  Un-Guard was the word of the day.  After the class the participants were given a full year trial membership to USA Fencing. 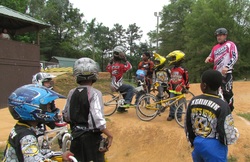 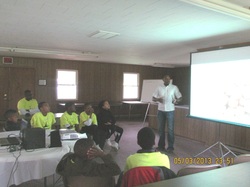 Manuel Mcgrinson a local economist, spoke to the kids on money and the free market.  He was a great instructor.  He instructed kids on some of the simple principles of basic economics.  The kids were very engaged. Afterward, the kids were quizzed and did very well.
(http://www.oureconomynewsletter.com/) 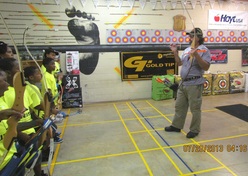 We went to Barefoot Archery, Charlotte NC.  The range was challenging and a lot of fun.  We worked out with Jessie Smith and the Bow Coaches.  The kids had a great time.  The instructor was great.  She instructed the kids in the do’s and don’ts of Archery.

Then she UNLEASHED the kids into some target shooting.  The kids quickly learned that hitting the target was not as easy as it looked.

We went to University City Division of the Charlotte Mecklenburg Police Department.  The class instructors were Officer Jason Armstrong, and Gang Unit Officer Hoffman.  Both officers were extremely patient.  Officer Armstrong showed the kids the facility, and taught on Gun safety.  The quote to remember was that,” guns are like a SNAKE, they are very dangerous for kids. DON’T TOUCH IT!!”   Officer Hoffman taught on the danger of Gangs.  Afterward, the kids were UNLEASHED into a question and answer session. The questions were numerous, but the officers were very informative. 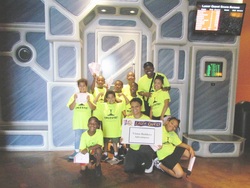 For the kids who participated in the CMPD class.  They were rewarded with a laser tag excursion.  The excursion was to Laser Quest, in Pineville NC.  The facility was large and really nice.  Tooney Henderson (a kid in the program) out tagged every one scoring 817points.  He set a goal for 1000 points, and came really close to accomplishing that goal.  After the session the kids had snacks and Pizza.  The kids had a great time. 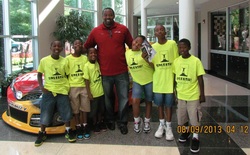 Our last excursion was to Joe Gibbs Racing in Huntersville NC.  At the complex we met with Derrick Crawford and Renaldo Wynn.  Mr. Wynn spoke on his 15year NFL career.  He also spoke to the kids on having a Game plan for your life.  After his speech he Autographed pictures, and gave the kids NIV Game Plan Bibles.  At the end of the class session we toured Joe Gibbs Racing.  We visited during business hours so mechanics were still in the shop. Some of the Mechanics spoke to the kids on the importance of their jobs.  The kids saw how they built a Nascar from start to finish.  We also saw the 3 race teams under Joe Gibbs Racing and their Championship wins.  Renaldo and Derek were extremely patience.  Wow!  What an awesome time. 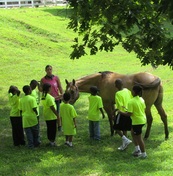 Our most challenging excursion this session was to Latta Equestrian Center, in Huntersville NC.  At the center we met with Valerie and her group of instructors.  The instructors taught the kids the basics of horseback riding.  After the instructions, the kids were UNLEASHED into horseback riding.  Some of the kids were extremely fearful of riding at first, but afterward one of the kids said, “This was the best day ever.”  At the end of the horseback riding the kids did barn activities.  They learned about the different breeds of horses and the equipment used to ride them.  They also learned how to care for horses.   (They feed the horses, and brushed the horses.)  We closed the session with a hay ride. 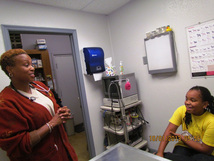 Hannah wants a career as a Veterinarian.  So we went to The University Animal Medical and Dental Clinic in Harrisburg NC.  At the Clinic we met with Dr. Madison.  Dr. Madison has been a Doctor of Veterinarian medicine since 1999.  Dr. Madison spoke on the importance of her primary education.  She spoke on her years before being a Doctor.  After her discussion she fielded Hannah’s questions. At the end of the visit Dr. Madison allowed Hannah to sit with her on some Pet visits.  Dr. Madison was extremely patient.  Hannah had a terrific time. 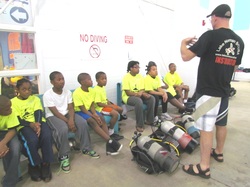 Our Second excursion was to the U.S. Aquatic Center, in Huntersville NC. We met with instructors Mike Irlacher and Larry Young of Lake Norman Scuba. Instructor Mike taught Snorkeling and Instructor Larry taught Scuba. After the classes the kids put on their Scuba gear, and entered the water. Mike and Larry then gave equipment instruction. Once the kids were comfortable with equipment and under water submersion. The kids were UNLEASHED under water. Wow! What a great time. ​ 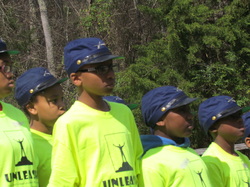 Our first excursion was to Latta Plantation in Huntersville N.C.  we met with instructor David Clay.  Mr Clay taught on the sacrifices, gallantry, and horrors of a Civil War Soldiers’ life. After the class the kids were drafted into the Union Army. Each kid was given a Civil war replica cap and replica Musket. Mr. Clay then UNLEASHED the kids into soldiering commands and listening drills. At the end of the session each kid was awarded the Civil war replica cap. 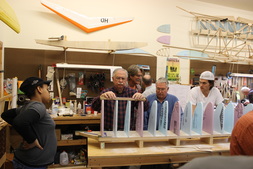 We hung out with Paul Grieshaber (US Airways Captain) and his young aviators team.  Witness the team building an actual glider.  Also learned some of the components of an Airplane.  And the inter working of an Airfield.